In 1964, John Knight was appointed the township's third Fire Chief. During his administration the department purchased new helmets, boots, and canvas fire coats for all the firemen. Up until that time, the firemen wore old rubber coats used when the fire department was
​first established.

In 1966, the department purchased a Mack fire truck for $35,000 with pump capacity of 1,000 gallons a minute. The township also updated its alerting system. Each volunteer fireman wore a radio, which alerted them to a fire or emergency.

In 1975, the township built its present fire station at 6900 E. Main Street. At the time, it was the largest station in Central Ohio. In 1976, the staff again increased to 18 employees, which included the Chief. 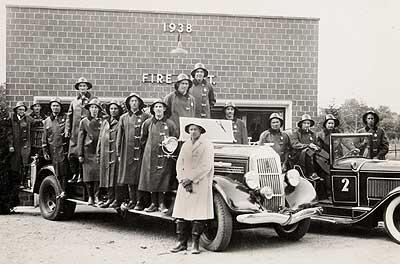 Over the years, the township implemented many improvements within the department, including the remodeling of station facilities into more functional facilities, and the acquisition of additional specialty equipment, such as a rescue van and a water rescue and recovery trailer. The township has also updated its advanced mobile medical units and policies affecting medical personnel, and has provided extensive emergency training programs and pay incentives for EMT employees receiving certifications. The township has upgraded its hiring procedures by employing only certified paramedics, and requiring entrance exams and eligibility tests.

​The township equips its medic units to treat advanced life support emergencies, such as heart attack, chest pain, shortness of breath, strokes, and other life-threatening emergencies. Each vehicle is staffed by three members of the EMS team.

In 2003, there were over 3678 EMS runs handled by the paramedics from Truro Township. 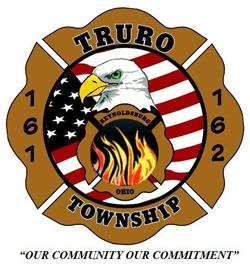 Providing fire, paramedic and other municipal services to 38,000 residents living in Truro Township, the Village of Brice, Ohio and the City of Reynoldsburg, Ohio.

The Truro Township Fire Department was established in April, 1937, and its first Fire Chief was Vinton H. Raymer. Since the department initially had no firehouse, Chief Raymer's garage became a
temporary firehouse. In May, 1938 the township broke ground for the first firehouse on Main Street, across from State Route 256 and Connell's Hardware.

The cost of the building was financed strictly from donations, while the Gail Landrum Construction Company donated the bricks. For the first fire station, the township purchased a new 220-volt siren, which alerted firemen living two to three miles away of a fire or emergency.

The department's first piece of firefighting equipment was a
99 horsepower truck capable of discharging 500 gallons of water
a minute.

In 1940, the Truro Township trustees purchased one of the first resuscitators in Franklin County at a cost of $439. It was used for respiratory emergencies such as drowning, gas poisoning, and
​heart attack.

In 1947, the Fire Department increased its ability to serve the growing community by building a new firehouse twice the size of the older one. The department also purchased a new 1947 International pumper truck that discharged 500 gallons of water a minute and acquired its first emergency squad vehicle.

In 1959, the township built its second fire station, located on Brice Road in the Village of Brice. The new station provided better protection for residents living in the township's southwest corner. The department acquired a new 1962 Ford pumper capable of discharging 750 gallons a minute. In 1963, the township purchased a GMC emergency squad vehicle.